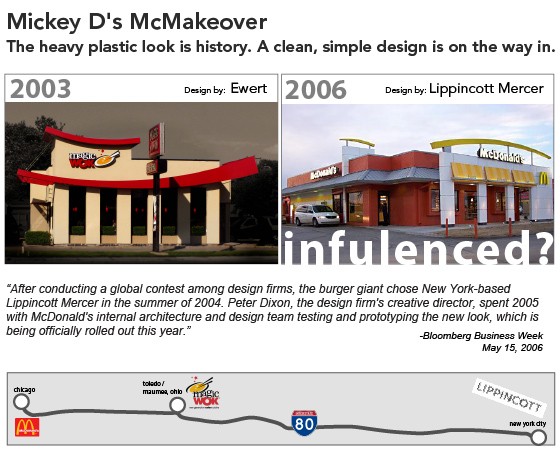 We Must Ask the Question:

Was the direction of the new McDonald’s brand architecture influenced by a 2003 road trip from New York to Chicago? Perhaps by a rest stop at Exit #59 along I-80 in Maumee, Ohio? Hmmm…

As a designers we fully appreciate the many influences which bombard our world each day. Some objects we intentionally ogle and evolve while other cues enter our sub-conscience through the osmosis of life. And then there are the collective thoughts of the world that seemingly populate independently.

We can’t say for certain what the case was here. However; we would like to think that the McDonald’s development team stopped at the newly designed Magic Wok for a spring roll en-route to the Oak Brook Headquarters, and left with a distinct impression. Later, this impression became the genesis for the new corporate architecture of the world’s largest restaurant chain.

Comments are now closed for this article.

Get fresh blog when it happens

Check out the highlights!